Happy New Year, although we are nearly in February of 2019, and I am welllllll overdue for an update…thankyou to the anonymous reader who commented requesting an update. But a lot has happened since my last post in October, not so much though on the SP, well it won’t appear to be that much as most of the time spent was fitting and testing the navigation and cockpit lights, and chasing my tail with the paintwork.

Speaking of the cockpit, I shaped the windshield out of a piece of flat Perspex then heated it in the oven before moulding it to fit the cockpit cavity, which was fun, and I was happy with the end result. The windshield can be seen in the photo below sitting on top of the fuselage before it was fitted in its final position.

My biggest headache was with the silver paint I used on the fuselage and wings which seemed to react to the blue masking tape I have been using, so I’ve been fighting a loosing battle trying to keep the silver areas looking decent with touch ups and respraying. As I have said before, this model is for myself so I’ll have to live with a few imperfections, but on the upside, a lot of lessons learned for future models.

Im pleased with the Nav lighting and the engine lights, although the landing lights are very bright, so I might consult my Avionics buddy to see what he can do to reduce the brightness. Apart from that, the model is in the final detailing stage, though I admit, it has been for a while, so hopefully I will post another update with the completed Aircraft before March… 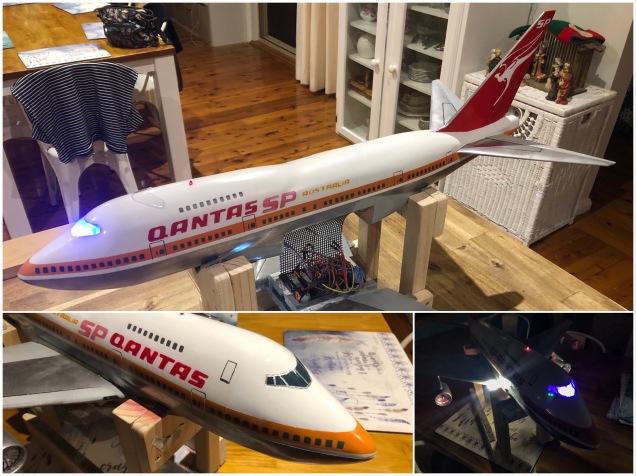